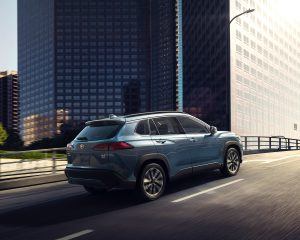 The Toyota Corolla brand has sold more units than any other vehicle on the world since its debut in 1966 – it is rapidly approaching 50 million sales! With the arrival of the 2022 Corolla Cross, it seems to be on the verge of becoming even more popular.

The all-new Corolla Cross is built on the same Toyota TNGA-C platform as the existing Corolla, but it has a radically distinct look. It’s a punchy vehicle that resembles the bigger RAV4, which isn’t necessarily a bad thing — it screams tough and adaptable, although in a scaled-down sub-compact form.

When it arrives, the Corolla Cross will be available in L, LE, and top-tier XLE trim levels. The latter has a seven-inch digital instrument cluster and an eight-inch free-standing infotainment touchscreen that combines with a nine-speaker JBL sound system — lesser versions have a seven-inch screen. For good measure, there’s a 10-way power driver’s seat, but the SofTex-trimmed seats didn’t do it for me. 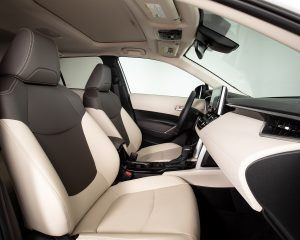 The really wonderful news is that Apple CarPlay, Android Auto, and heated front seats are standard on all variants. Power moonroof, liftgate, wireless charging, and a variety of attachments intended to transport bikes and the like will be available as options.

The Corolla Cross performs well in terms of spaciousness and usefulness. While the wheelbase is 50 millimetres shorter than that of the RAV4, there is still 812 millimetres of back seat legroom and plenty of headroom, so a couple of six-footers will not be complaining. Of course, practicality is essential. The Corolla Cross offers about 720 litres of storage space with the seats up in the front-drive variant and 690 litres in the all-wheel-drive type. Toyota does not specify the load capacity with the 60/40-split/folding seats folded, although it seems to double.

All versions come equipped with Toyota’s Safety Sense 2.0 suite of active safety assistance. If the Cross’s package is similar to the Corolla hatchback’s, it will include a pre-collision system with pedestrian and bicycle detection, lane departure with maintain assist, adaptive cruise control with lane centering, and auto high lights. The LE and XLE versions are anticipated to come standard with blind spot monitoring.

This vehicle is powered by a 2.0-litre four-cylinder engine that produces 169 horsepower and 150 pound-feet of torque. It powers the front or all the wheels using a continuously variable gearbox (CVT).

One advantage is the Direct Shift transmission. When moving, it utilises a normal mechanical first gear before switching over to function like a conventional CVT. This simple modification enables more power to be sent to the wheels, improving initial pickup and overall performance. It also allows the Corolla Cross to pull 680 kg.

If you’re looking for a vehicle, the Corolla Cross’s Dynamic Torque Control all-wheel-drive system is the way to go — it’s a fair guess that about 80% of buyers will choose it. Under regular conditions, it powers the front wheels, but it may transfer up to 50% of power to the back wheels if necessary. It also aids in getting the Corolla Cross through a turn and pulling away by transferring driving torque to the appropriate wheels.

The advantage is seen in the fuel efficiency. With an anticipated average of 7.8 litres per 100 kilometres, it consumes only 0.4 L/100 km more than the front-drive version. There is no discernible cost for the extra traction.

Another benefit of opting with all-wheel drive is that it foregoes the torsion beam rear suspension of the front-wheel-drive variant in favour of a superior multi-link design. This should result in improved highway handling and comfort. While it rides higher than the Corolla hatchback, hoping the handling does not go too far from light and tight.

The Corolla Cross is a fascinating new addition to the lineup. It capitalises on the RAV4’s appeal and elegance while also carving out a place for itself. It promises to be a quick seller, adding to the Corolla’s strong reputation; it also serves as a welcome alternative to the CH-R.

The Toyota Corolla Cross 2022 will be on sale this autumn. Full details and price will be released closer to the event.