Everything we know thus far about the forthcoming Toyota Tundra 2022 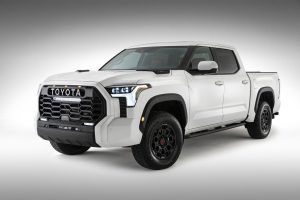 The manufacturer has released a slew of teaser images of the pickup, giving us a good sense of what to anticipate when this long-awaited new truck arrives.

Finally, the third-generation Toyota Tundra is nearly here, and the truck’s dry period of innovation and technical development is about to be fed with an all-new model for 2022. Current Tundra owners and supporters have been eagerly waiting for a new vehicle since the refresh in 2014, following the truck’s initial introduction in 2007. Some manufacturers have rebuilt their trucks three times in the seven years since the last big Tundra upgrade.

#Disappointment is unlikely to be a hashtag when the new truck is completely unveiled, which might be on September 19 if we can deduce from the confetti of teaser images Toyota has just released: The date coincides with the Texas State Fair, which is taking place in the Lone Star state where the Tundra is now being built. And 9:19 was the time displayed on the smartphone in a picture published by Toyota to demonstrate the Tundra’s wireless charging.

This is a significant shift for the Tundra, which is one of the most dependable pickups on the road today and has a better resale value than nearly any other vehicle. The current Tundra will soon be qualified for its senior’s discount at Shoppers, thanks to a new and lighter but stronger structure, new engine, new interior, new technology, and new features.

The 2022 Tundra will ride on Toyota’s TNGA-F platform, which also supports the next Land Cruiser 300 (to be marketed in North America as the Lexus LX), and will share these bones with the 2023 Sequoia, sixth-generation 4Runner, and 2024 Tacoma. The centrepiece of this new platform is its new coil-spring, multi-link rear suspension, which is said to include more high-strength steel and considerably greater stiffness. Instead of conventional leaf springs, which are a holdover from the horse-and-buggy era and provide a harsh, twitchy ride, the new Tundra will use coil springs, as RAM did in its half-tons in 2009. RAM was a risky move at the time, but it has since proved popular.

Of course, leaf springs are excellent for bearing weight and are fairly tough off road, but they’re terrible at elegantly absorbing shocks, particularly without a load. A trip in an ancient Jeep will remind you of that. The TRD Pro model will even have Fox dampers. The coil-spring and solid rear axle combination should provide the best of all worlds — great on-road characteristics as well as the capacity to handle big loads.

Carrying a large load in the current Tundra has proven impossible due to the Crewmax’s low 1,200-bs rating, and even that little weight causes visible droop. Expect the new truck to be capable of carrying between 1,700 and 2,200 pounds, similar to the 2021 F-150. Our prediction is that the Tundra will top 2,000 pounds, if only to make a statement. Towing capacity should increase somewhat as well, with the current Crewmax restricted to 9,200 lbs – still a large amount that puts a lot of pressure on the chassis, brakes, and engine.

It is unclear if the Tundra will retain its smooth 5.7-litre V8 engine as an option on some lower models, but we hope so. The engine is buttery smooth. We can confirm that the new Tundra will utilise the same engine as the new Land Cruiser: a 3.5-liter twin-turbo V6 with 409 horsepower and 479 lb-ft of torque. The engine gets multi-port direct injection, which may result in significantly increased fuel economy.

While the Land Cruiser has a 3.3-liter twin-turbo V6 diesel option, it is very doubtful that it will be available in North America, despite the fact that Ford, GM, and Ram all offer diesel engines as an option. We can hope that the Tundra will follow suit. The Toyota diesel engine generates 516 lb-ft of torque. Insert a cheerful expression here. A hybrid Tundra unit is also in the works.

Other important elements from the new Land Cruiser are anticipated to be carried over to the Tundra, such as a direct-shift, 10-speed automatic gearbox with fewer gear steps and broader gear ratios. This could also help with highway fuel economy, but the current Tundra can reach 12 to 13 L/100 km at highway speeds of 100 km/h. A new “multi terrain select” mode enables drivers to pick modes that fit the road conditions with the turn of a knob, giving options for dirt, sand, mud, deep snow, rock, and auto.

The exterior, of course, has been changed in accordance with the few official pictures that have been published, while images for additional trims are still pending. However, it seems that for the first time, a 6′-5” box will be available on the Crewmax (four-door) – a long-standing source of dissatisfaction among those who need a larger box than the present 5′-7” but still desire the advantages of the Crewmax’s real estate. Have you ever tried transporting an ATV or a snowmobile in a shortbox? We hope not.

Previously, the only way to obtain a true 6′-5″ box was with a double cab. An 8′-1″ box was also available. LED bed illumination and a novel cargo tie-down system are also rumoured for the new truck. We’re mainly looking for an easy step to get in and out of the bed that could use a lot more anchor points.

Expect substantial advancements in the inside, with instruments becoming entirely digital while retaining redundant knobs and switchgear. The popular power-folding rear window will continue, boosted by a larger, panoramic sunroof, but we hope we won’t have to choose the large sunroof to get the folding back window. Let’s hope internal storage options improve significantly, since they are currently lacking on the Crewmax.

The new Land Cruiser gets a 12.3-inch info panel, so top-tier Tundras should receive the same, while lower trims will get a smaller, 10-inch display that improves on the current eight. Safety will certainly be improved, with most of it being standard equipment.
Regardless of all the additional improvements, the one thing we hope remains in the new truck is what has made it so durable over the years: Tundras seldom break down or wear out early. Unlike our eagerness for a new one.