Looking for a stout, powerful, and capable full-size pickup, with serious off-road capabilities to boot? Well, while North American manufacturers have flooded the market with advertising and pickups that require every available option to perform even the most mundane tasks, the Toyota Tundra has quietly been covering all these bases, and more, for over twenty years! Redesigned for 2022, learn more about the truck where capability comes standard—the Toyota Tundra—with Calgary’s very own Stampede Toyota. 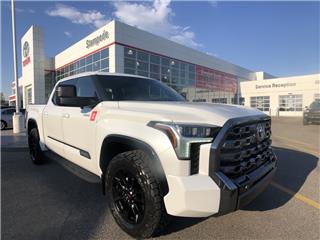 The redesigned Toyota Tundra offers an even more rugged look for the 2022 model year, with an enlarged and aggressively-styled grille flanked by two LED daytime running lights. Angular lines are found throughout the bold exterior of the 2022 Tundra, sitting atop a fully boxed ladder frame, with black mud guards and available active front grille shutters and spoiler completing this Toyota pickup truck’s showstopping looks.

Smart features such as the available power extendable & folding tow mirrors with an integrated turn signal and Blind Spot Monitor notification adds serious utility to the 2022 Tundra’s exterior design, while a variety of appearance packages help differentiate the Toyota Tundra trims while simultaneously shining a light on their capabilities. From the six grades and three bed lengths of the Tundra trim lineup, to the substantial style and utility of the Limited trim or TRD Off-Road package—including a TRD front grille, heated steering wheel, multi-terrain monitor, and more—there’s a 2022 Toyota Tundra for every driver.

The all-new 2022 Toyota Tundra offers classic pickup appeal and utility thanks to its muscular design, while a seriously spacious interior decked out with premium materials help raise the stakes even further. Select trims offer heated 8-way power adjustable seats, while the Limited and Platinum trims provide heated and ventilated seats, with the latter even offering them for the second row—and that’s not even touching on the buttery soft Semi Aniline leather.

However, it’s the impressive utility of the 2022 Tundra that really sets it apart from the competition, starting with Toyota’s signature power vertical rear window. From there, an available 14-inch touchscreen—one of the largest in the segment—combines with the standard Smart Key with Push Button Start + Tailgate and Tailgate Release Bump Switch that make accessing the Tundra’s high-strength Sheet-Molded Compound (SMC) composite bed easier than ever.

The 2022 Toyota Tundra does away with the endless engine options offered by the competition, with Toyota engineers deciding to just get it right the first time. A twin-turbo, 3.5-litre i-FORCE V6 replaces last year’s 5.7-litre V8, providing more horsepower and torque along with even more efficient performance. That means a bump to 389 horses, 479 lb-ft worth of torque, and up to 12,000 lbs towing capacity. Matched to an advanced 10-speed automatic transmission with intelligence (ECT-i), the new 2022 Tundra provides an estimated fuel efficiency of 13.5 L/100 km in the city alongside just 10.6 L/100 km on the highway. Thanks to its front double wishbone suspension and rear 5-link multi-coil suspension system, the 2022 Toyota Tundra isn’t just efficient—it’s remarkably smooth and stable too.

Beyond raw power, the 2022 Toyota Tundra provides a ton of smart, advanced performance too, starting with its standard Tow/Haul mode, allowing you to adjust throttle response on the fly while Tow/Haul+ adds a few features for even more impressive towing. Add in the Trailer Reverse Guidance with Straight Path Assist feature, or the standard 4-wheel drive and available off-road features, the technology in the redesigned 2022 Tundra helps to conquer any path ahead. And for those willing to wait until later in the year, the hybrid-electric powertrain of the Tundra i-FORCE MAX is sure to excite, with up to 437 horses and 583 lb-ft of torque alongside fuel-thrifty hybrid performance.

The 2022 Toyota Tundra isn’t just incredibly capable, it’s exceptionally smart too. The Apple CarPlay™- and Android Auto™-compatible Toyota Multimedia system is brand new on the Tundra, offering up to five-times the speed and power of previous Toyota infotainment systems and including everything from infotainment to navigation and safety features. Towing was at the front of mind when introducing Toyota’s Panoramic View Monitor (PVM), with multiple cameras offering multiple angles on the available 14-inch touchscreen or available rearview mirror camera—including both a 360-degree top-down view or split-rear view.

However, all that pales in comparison to the standard Toyota Safety Sense 2.5 system found standard across the 2022 Tundra lineup, with features like Lane Tracing Assist, Automatic High Beams, Left Turn Intersection Support, and so many more signals for safer driving. Mixed with the Star Safety System, a supplemental airbag restraint system, and rugged build, and the 2022 Toyota Tundra offers no shortage of smarts or safety.

Considering the second generation Tundra remained largely unchanged since its release in 2007, minus a small refresh in 2014, it was about time Toyota updated their full-size pickup. The 2022 model is nearly unrecognizable from the 2021 Toyota Tundra, thanks to a revamped exterior, interior, and updated performance and technology. From Toyota’s brand new Toyota Multimedia system making its debut on the 2022 Tundra, to the ultra-advanced safety and driver assistance features found courtesy of the standard Toyota Safety Sense 2.5 system, the 2022 Tundra is one for the ages. With an expected release later this year, Toyota plans on upping the ante courtesy of a hybrid model capable of producing 437 horsepower alongside 583 lb-ft of torque. Keep your eyes peeled on the Stampede Toyota blog and website for more information regarding this electrifying addition to the Tundra lineup.

You can explore the different 2022 Toyota Tundra trims below, or get a more in-depth look here. 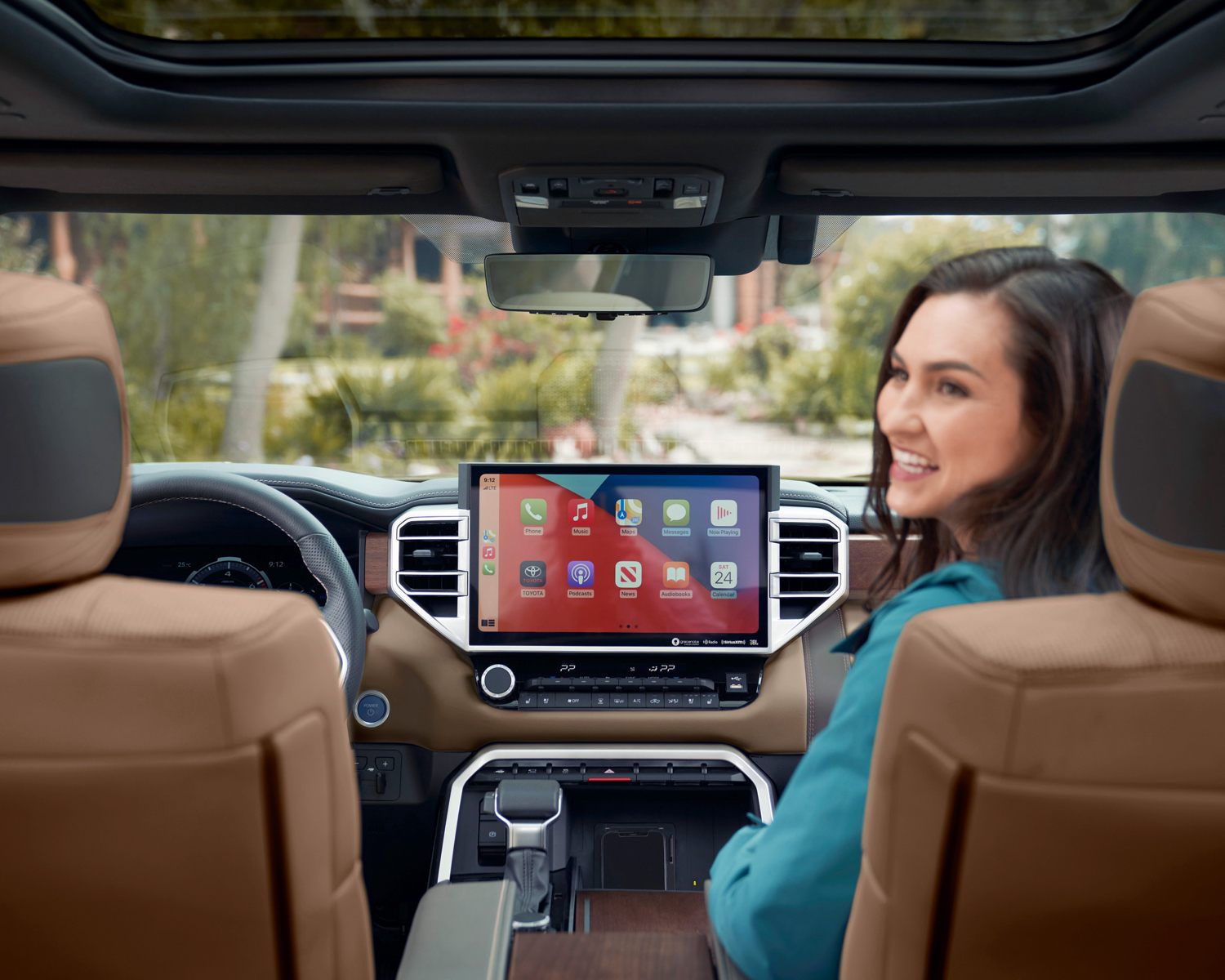 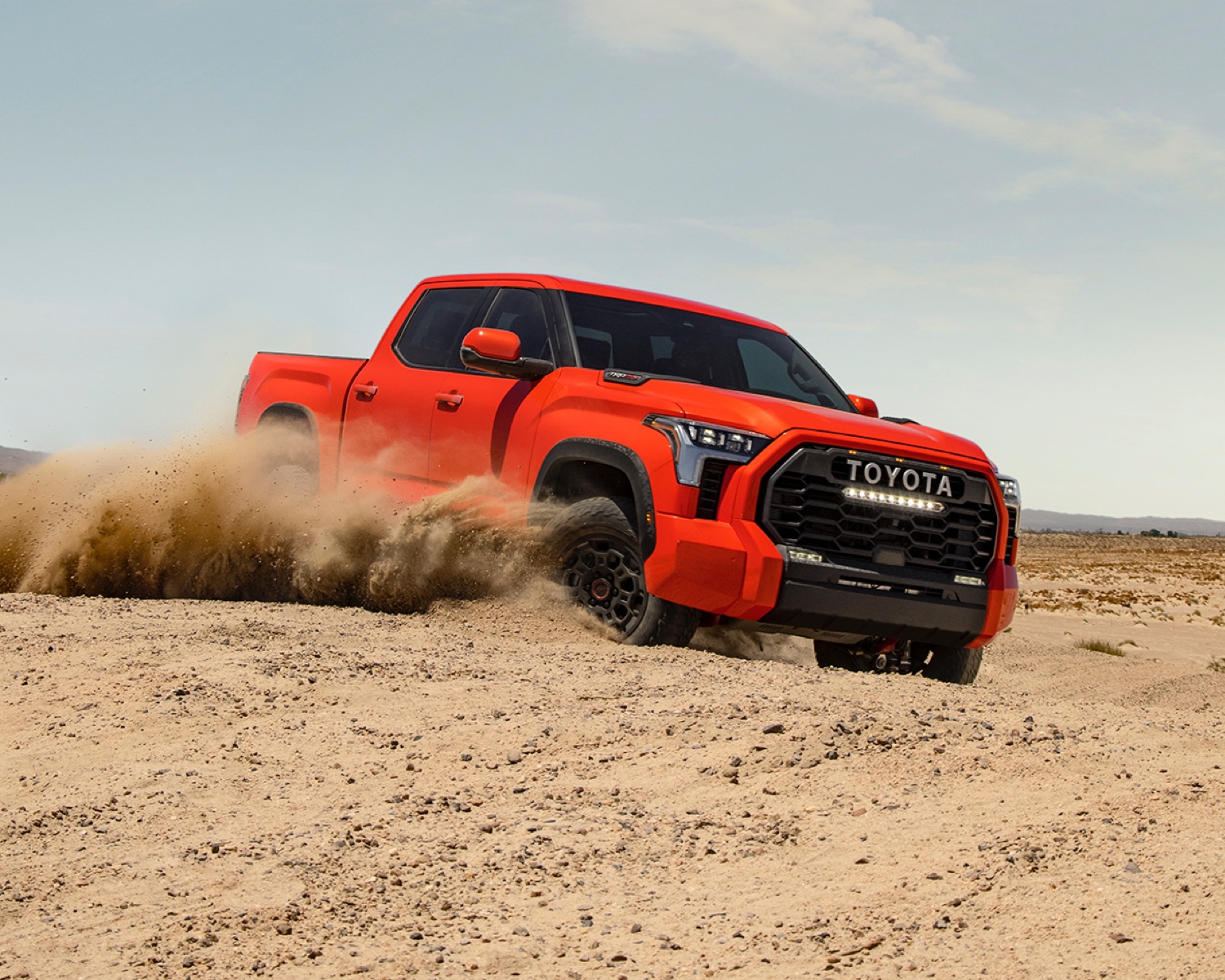 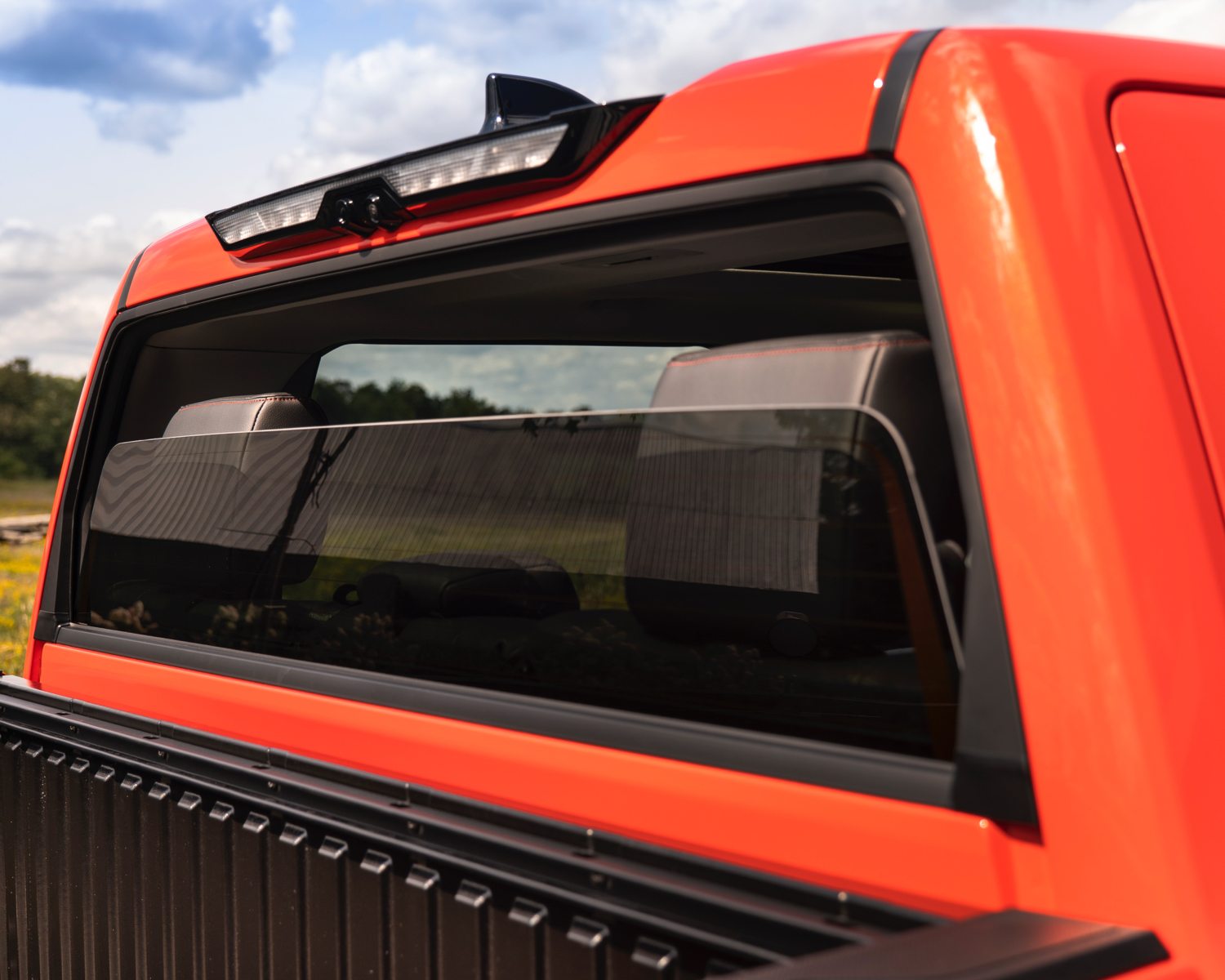 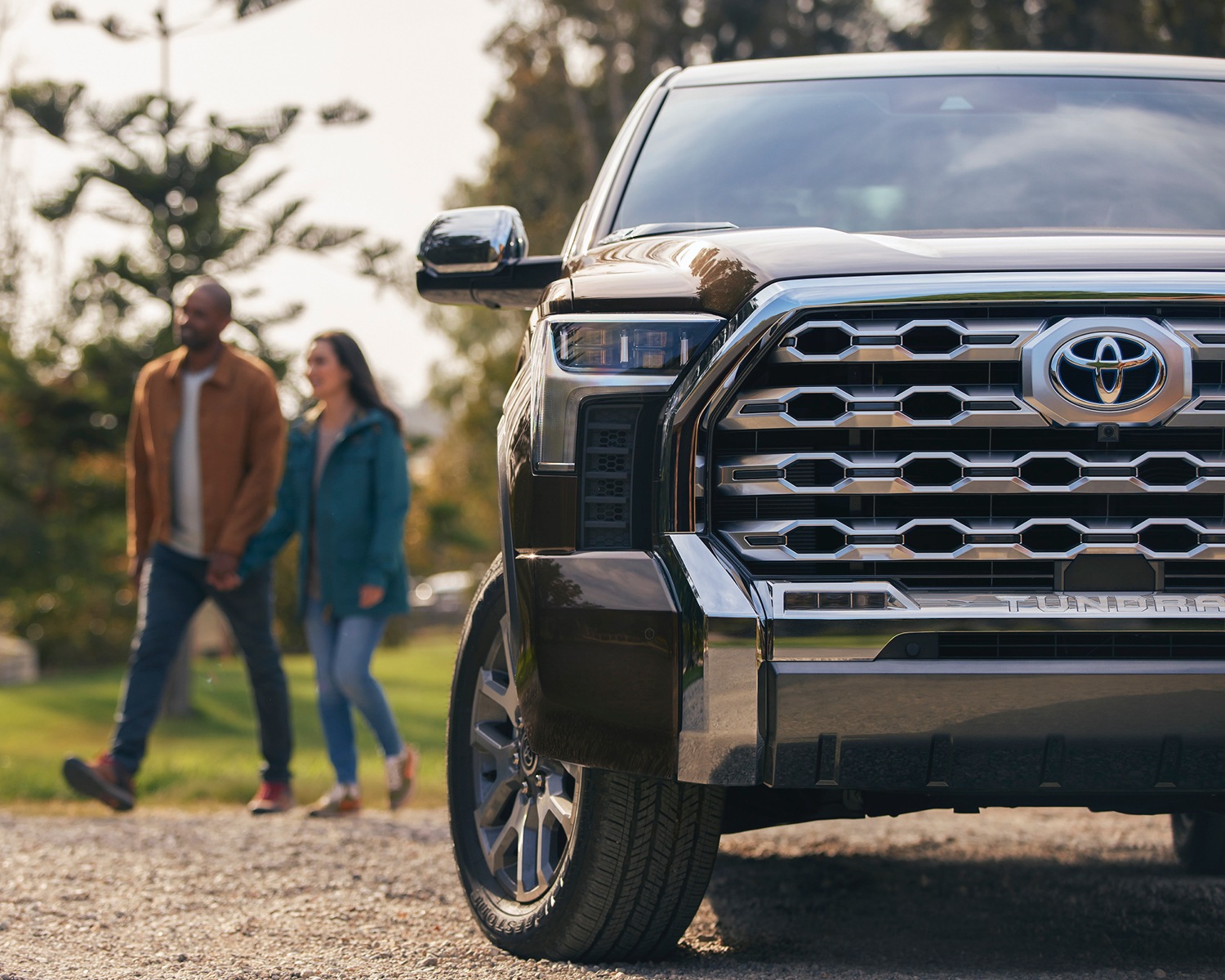 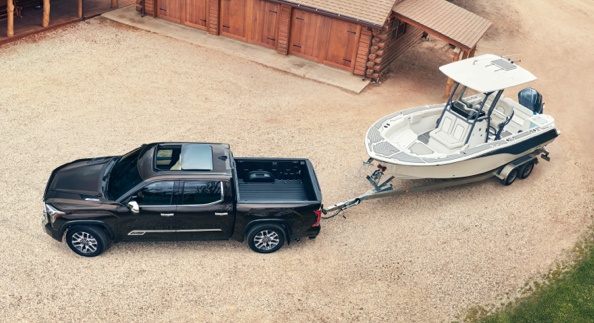 The redesigned 2022 Toyota Tundra is as versatile as they come, offering solid performance and capability both on-road and off, along with a spacious interior, striking utilitarian design, and a ton of advanced technology and safety features. While other pickup trucks on the market offer too many trim choices and options, Toyota keeps it simple with the 2022 Tundra by simply offering a truck that does it all. To learn more about the 2022 Toyota Tundra, or to book a test drive, contact us via the form below. And if the Tundra isn’t your first choice, check out Toyota’s smart midsize, the 2022 Toyota Tacoma. You can also stop by or give us a call to explore our extensive selection of new and used vehicles, service, parts, financing, or any of the other automotive services we offer Calgary and the surrounding communities at Stampede Toyota.